Towards the end of the 1700s, engineer Giacomo Guglielmi started construction of the farmhouses of Jago surrounding the centre of the estate which most likely dates backs to the early 1700s.

In the 18th century the vineyards in the Valpolicella were managed through share cropping tenures. At that time, grapes were just one of the many crops grown on the farms in the area which also produced fruit and arable crops, as well as rearing livestock.

In the second half of the 1900s, the freehold agreements substituted the share cropping tenures and the production of wine became more and more important until it became the dominant product, and symbol, of the Valpolicella.

Once the wine crisis of the 1980s was over, the Valpolicella and its wines, especially the Amarone, became synonymous around the world with quality wine.

In that period, many small and medium farms which up until then produced grapes to sell on to wine producing companies, started producing their own high quality wines and building themselves a reputation for such.

Villa Spinosa was one of the wineries created in that period. Significant restructuring of the farmhouses and vineyards made it a high quality grape grower and wine producer.

By transforming the outhouses which were originally constructed for farm activities such as stables, corn stores, chicken runs and shelters for cattle and equipment, it has transformed its historical outhouses into spaces which house the various production phases of Valpolicella wines. These include areas to dry the grapes for the Amarone and Recioto, to rooms in which to store the barrels of maturing wines.

The renovation of the living quarters, originally inhabited by farm workers, means that today, Villa Spinosa can offer self-catering accommodation to those looking for the eno-tourism experience.

Vineyard expansion is also continuing with work on the foundations of fields allowing new and efficient vineyards to be planted.

This long and arduous transformation from farm to prestigious wine producer has allowed Villa Spinosa to become a modern and efficient winery in the Valpolicella Classica region recognized for its high quality of wine production.

The Villa, which overlooks the lower valley of Negrar, is characterised by an elegant symmetrical design and sober tuff decorations.

The façade of Villa Spinosa is characterised by windows of varying shapes and dimensions which allow the rustic atmosphere and climate to be fully enjoyed.

The decorative elements that frame the windows and doors are interesting because of their classical style which alternates between smooth friezes and triangular frontons.

The Villa is an example of 19th century architecture, linked partly to the old tradition of Villa Veneta construction.

From the 1700s onwards many of the economical aspects which had influenced the development of this type of building in the previous centuries changed. The landowner's residence became in fact more of a holiday home, no longer being used for a practical function related to farm management, but more for pleasure and relaxation.

An elegant garden, elaborated at the beginning of the 1900s provides a perfect setting for the villa. Various elements of landscape design are harmoniously combined in this garden: the classical Italian tradition, the romantic inspiration of English-style gardens and local landscape characteristics.

Box hedges, the favoured shrub in all Italian style gardens, are shaped in harmonious geometric designs creating neat pathways that guide the visitor towards viewpoints from which the whole property may be admired.

The garden combines Mediterranean flowers and exotic species with local plant and tree species, with the walkways being lined by citrus trees. This mixing is a characteristic of the Veronese landscape tradition that benefits from the mild climate guaranteed by the nearby Lake Garda which allows lemon groves to be planted even in hilly areas.

A small belvedere at the edge of the garden protected by the thick vegetation offers a viewpoint over the Valpolicella and the property.

To the side of the Villa are the rustic outhouses, a fundamental part of the present winery and ancient centre of the Villa Spinosa complex.

The rural buildings are connected in an L shape and show two peculiarities of the old architectural style of the Valpolicella.

The closed external side guarantees defence and security of the farm whilst the  courtyard created on inside of the L was used for some of the farm work activities as well as for hosting parties and family celebrations for the people who lived there.

The recent renovation has amplified the characteristics of the historic architecture. The buildings have maintained their character and historical importance by being used for the functions for which they constructed thus creating a mixture of tradition and innovation. 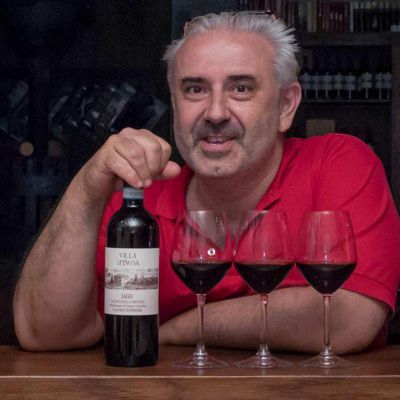 Write to us for further information
about Villa Spinosa or
for booking a visit.

It will be our pleasure to let you know
our proposals and welcome you
to the heart of the Valpolicella.

Send us a message